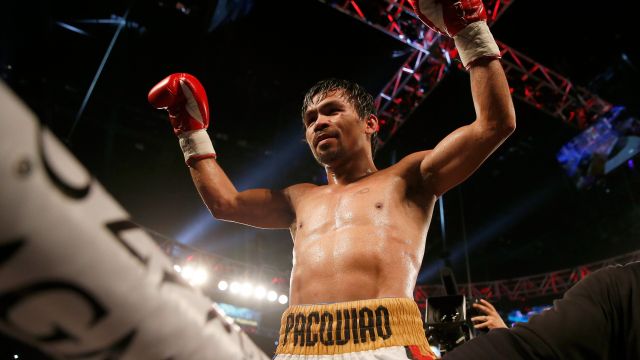 SMS
Manny Pacquiao Defeats Timothy Bradley In His Potential Final Bout
By Matt Moreno
By Matt Moreno
April 10, 2016
Pacquiao won Saturday's bout in a unanimous decision, but there's speculation over whether or not it will be his last fight.
SHOW TRANSCRIPT

In what Manny Pacquiao says will be his final fight, the Filipino boxer defeated American Timothy Bradley Jr. by unanimous decision.

Pacquiao and Bradley faced off for the third time with one win each before Saturday's matchup. But Pacquiao turned in a near-perfect performance, knocking Bradley down twice throughout the 12 rounds.

And all three judges agreed, giving Pacquiao a 116-110 score on all three cards, earning him the WBO welterweight championship.

This was the first fight for Pacquiao since his May 2 bout with Floyd Mayweather. Pacquiao lost by unanimous decision in what was billed as the "fight of century." Mayweather retired one fight later.

This was also Pacquiao's first fight since the anti-gay comments he made in February, calling same-sex couples "worse than animals."

HBO, which aired the pay-per-view bout, came under fire for continuing its relationship with Pacquiao after the comments.

The network said in a statement prior to the fight: "We have an obligation to both fighters and, therefore, will proceed to produce and distribute that event. ... We consider [Pacquiao's comments] insensitive, offensive and deplorable."

Pacquiao signed a two-year extension with HBO in 2014, a deal that goes until December 2016. He also had a deal with Nike, though Nike cut ties with him after the comments.

Pacquiao, who is also running for a Senate seat in the Philippines, has previously said this would be his last fight, although there's speculation as to whether or not that's true.

There have been rumors of a possible Pacquiao-Saúl "Canelo" Álvarez bout, although no deal is currently in place.