New Zealand Media Up In Arms Over Skinny Mannequin's Ribs 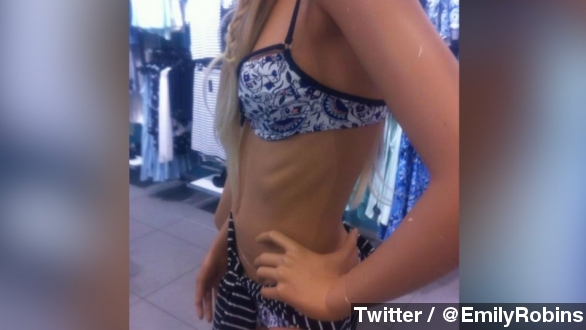 SMS
New Zealand Media Up In Arms Over Skinny Mannequin's Ribs
By Katherine Biek
By Katherine Biek
October 14, 2014
A mannequin with protruding ribs in New Zealand's Glassons retail stores has upset many in real life and on the Internet.
SHOW TRANSCRIPT

Store mannequins — in general — are fairly slender. But the mannequins at one store in New Zealand look very different from the rest.

Emily Robins snapped this photo of a mannequin with its ribs exposed last Thursday while shopping with her cousin at a department store called Glasson's.

Immediately, people headed to social media to give their two cents. Some agreed that the mannequin was unnecessary, while others didn't see the problem — pointing out mannequins have never been designed to reflect a woman's body in the first place.

According to New Zealand's Life & Style, the store's chief executive defended the mannequin, noting it's "healthy" body mass index of 18.8.

Which is still pretty skinny. The National Heart, Lung and Blood Institute says a person is considered underweight if they have a BMI less than 18.5.

And the CDC reports the average American woman's BMI is 26.5.

Robins stopped by TVNZ to speak about her ideas about the mannequin's size.

EMILY ROBINS: "I didn't want my 17-year-old cousin to feel that she had to be that size to feel good in the clothes."

New Zealand fashion icon Denise L'Estrange-Corbet was also on hand to provide commentary. Only she doesn't see a problem with the mannequin.

DENISE L'ESTRANGE-CORBET: "Clothes look better on skinny people. They just do. That's always the way it is."

L'Estrange-Corbet also spoke about how slender models are very prevalent in today's fashion industry, pointing out Armani had just received a lot of negative press for using incredibly skinny models in its Milan runway show in September.

But that skinny mannequin is causing some to worry.

The New Zealand Herald spoke with a psychotherapist who said: "It's just ridiculous to show ribs. It's absurd to me. ... Why not go the other way? Why not show realistic healthy people? They'll still buy the clothes."

There's been no word on whether the company will be removing the mannequin from its stores. It's currently used in 26 of Glassons' stores around New Zealand.