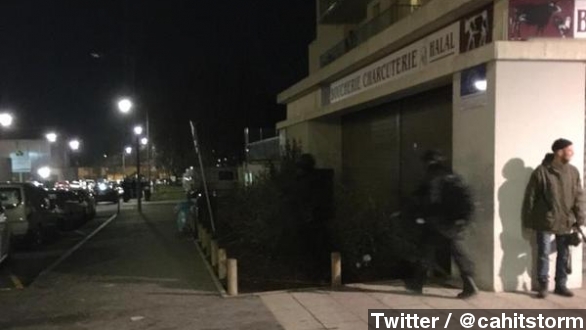 SMS
Conflicting Reports In Manhunt For Paris Shooting Suspects
By Steven Sparkman
By Steven Sparkman
January 7, 2015
Police have identified and — according to some reports — confronted the suspects in Wednesday's mass shooting in Paris.
SHOW TRANSCRIPT

The BBC reported, "One of the suspected gunman, the youngest, 18-year-old Hamyd Mourad, has indeed handed himself into police."

That goes against an earlier report from NBC that the manhunt had ended in a firefight.

NBC's Bill Neely reported, "Just to confirm that news, it came from a senior U.S. counterterrorism official saying that in that shootout, one had been killed and two suspects had been arrested. We think that was the operation in Reims."

It's not clear where either event is supposed to have taken place. Police were seen storming a building in Reims, but it might have been unrelated. (Video via BFM-TV)

Police had identified the suspects earlier in the day, with the French edition of MetroNews among the first to publish the names: French-born Algerian brothers Said and Cherif Kouachi, both in their 30s, and 18-year-old Hamyd Mourad.

If those men really are the gunmen, it means Wednesday's attack has a possible Al Qaeda connection. The oldest suspect, Cherif Kouachi, already has ties to radicals.

Sky News reported, "It's believed Cherif Kouachi was convicted in 2008 of terrorism charges for helping funnel fighters to Iraq's insurgency."

A witness to Wednesday's shooting says the gunmen claimed to be affiliated with Al Qaeda in Yemen. That group specifically put Charlie Hebdo's publishing director, Stéphane Charbonnier, on its most-wanted list in 2013 because the magazine had published cartoons of the Prophet Muhammad. Charbonnier was one of those killed in the attack. (Video via i>TELE)

That's not proof that the attackers were actively supported by a terrorist organization, and Al Qaeda has yet to claim responsibility.

But analysts who saw the gruesome amateur video of the shooting have told news outlets the gunmen appeared well-equipped and well-trained.

Vigils were held in Paris and other major cities around the world for the 12 killed and 11 wounded in the attacks.