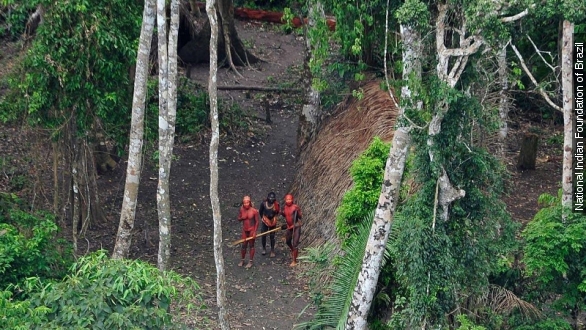 The idea of uncontacted peoples in the Amazon is one that captures the imagination. (Video via National Indian Foundation of Brazil)

Such that videos like this one from the BBC of an isolated tribe in Brazil still make the rounds on the Internet. (Video via BBC)

But for some people, the issue of what to do about isolated peoples is extremely real — like villagers in the Manu National Park in southeastern Peru. (Video via Peruvian Society for Environmental Rights)

Members of the Mashco Piro tribe, pictured here, reportedly attacked a village and killed a 20-year-old man with a bow and arrow. (Video via Interethnic Association for the Development of the Peruvian Rainforest)

A group of about 30 tribe members have had run-ins with the village several times already this year, usually raiding it for supplies. (Video via Madre de Dios River and Tributaries Native Federation)

Their case raises a tough question for the authorities: How to protect the villagers, who don't want to be relocated, without disturbing the tribe?

The village is populated by more modernized indigenous people, and they've asked for barriers to be constructed to keep the tribe out of their settlement. (Video via Madre de Dios Regional Educational Authority)

But that's just one possible solution that won't address more systemic problems authorities have identified, which include illegal logging and drug trafficking, driving tribes out of isolation. (Video via CCTV)

One isolated tribe in Brazil that spoke with interpreters said outsiders had killed tribe members and asked for help. (Video via National Indian Foundation of Brazil)

But actually helping the tribes presents a whole host of problems — not the least of which is disease.

As the BBC reports, the tribes are more vulnerable to common diseases because they haven't developed immunities through exposure.

The threat that problem can pose is evidenced by history. Starting in the 16th century, disease killed an estimated 95 percent of indigenous people in the Americas over the course of just a few generations.

In the meantime, officials from Peru's Ministry of Culture have assigned conservation officials and specialists to look into what to do about the encounters.