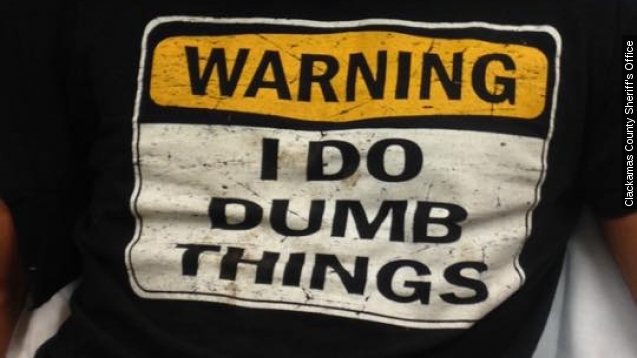 We're going to give you a second to read this man's shirt. Now, we can't say we didn't see this one coming.

According to the Clackamas County Sheriff's Office in Oregon, this man allegedly stole a car and then led police on a chase.

He then decided to try to escape on foot, but a police dog ended that game of hide-and-seek.

Twenty-three-year-old Roshawn Garrett has a long criminal history for his young age — and KPTV put together all the mugshots to prove it.

Maybe Garrett borrowed that shirt from this Texas man who was arrested after several DWI convictions.

Who had probably borrowed it from this guy in Florida who was arrested for breaking into cars.

Really, the moral of the story should be to not do dumb things. But if you're going to do dumb things, don't make it worse by wearing a shirt that draws attention to them.