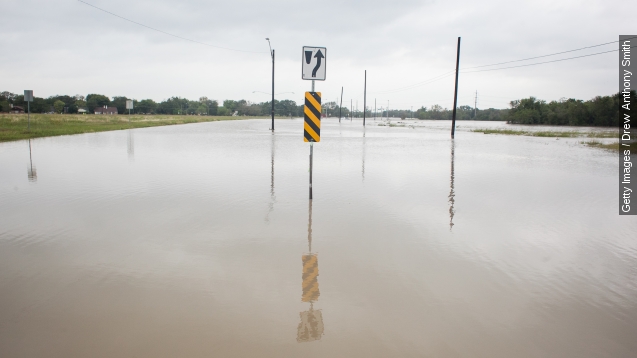 SMS
Man Stranded In Tree Really Buries The Lede In TV Interview
By Cliff Judy
By Cliff Judy
October 31, 2015
A Texas man provided us with one of the oddities of journalism when he waited to tell a local news station he was stranded in a tree.
SHOW TRANSCRIPT

Friday's flooding in Austin, Texas, provided us with a wonderful example of the oddities of journalism. (Video via YouTube / Steffen Hymel)

It's called "burying the lede." It typically happens when you're about halfway through a story and you say something that makes your viewer say, "Wait, what?"

When Kerry Packer's car got swept away by floodwaters, he sent the video he shot on his cell phone to his wife who then sent it to KVUE. The station, of course, wanted an interview.

"The car was almost filled with water," Packer said. "I swept past a tree and I jumped out of the window and climbed up a tree, so I'm about 20 feet up a tree right now."

"Wait, you're still in the tree?" KVUE's anchor asked.

No big, I'm just 20 feet up a tree with my car swept away, completely surrounded by floodwaters and I can't see any people around me. I'm fine.

One of the station's reporters later Periscoped this video of a helicopter trying to locate Packer, who ended up getting rescued after more than five hours in the tree. For the record, he had called 911 before the interview.