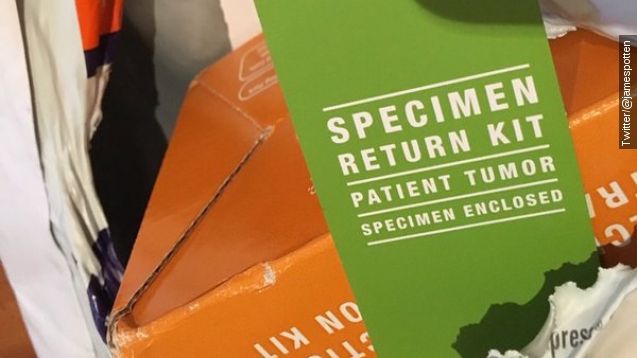 A man in the U.K. excitedly opened a FedEx package expecting the Amazon Kindle he ordered.

But, surprise! In what could be called the grossest package mix-up ever, he got a human tumor specimen instead.

James Potten tweeted the image out and tagged FedEx. Nothing like a good call-out on social media when a company messes up.

Potten told BBC he also called FedEx twice to tell them about the delivery mistake, but they didn't contact him back until the middle of that BBC interview.

"We shouldn't have this. It's human DNA. I would have thought there would've been a quicker response from FedEx," Potten said.

He told The Sun that FedEx customer service kept insisting his package had a Kindle in it.

Potten never opened the box that had the tumor in it, just the outer packaging. The sample was supposed to be delivered to a hospital in London.

Potten later wrote that the tumor sample was on its way to the right people. It's unclear whether he ever did get his Kindle in the mail.

This video includes an image from Getty Images and Twitter / @jamespotten.