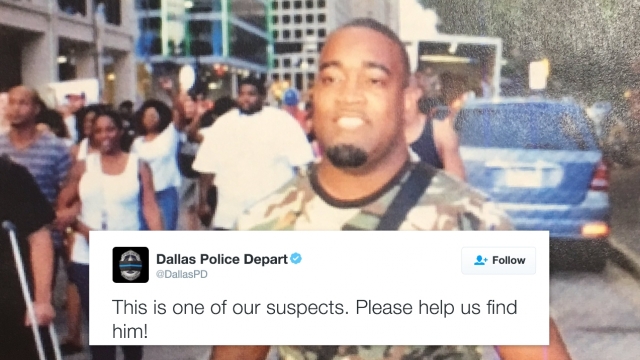 SMS
Man Labeled Dallas Shooting Suspect Says He Had Nothing To Do With It
By Ben Lawson
By Ben Lawson
July 8, 2016
The Dallas police tweeted a photo of a man they said was a suspect in the shootings, but now it seems he's been cleared of wrongdoing.
SHOW TRANSCRIPT

A Dallas rally against police brutality on Thursday night went from a peaceful protest to chaos.

After the shooting, Dallas police tweeted this photo, calling the man a suspect in the attack. But it seems that man, now identified as Mark Hughes, wasn't involved.

"Now that you have my face on the national news, are you going to come out and say this young man had nothing to do with it?" said Hughes.

Hughes was identified as a suspect after photos from the rally showed him with a gun strapped to his chest.

His brother, one of the rally organizers, said Hughes was simply exercising his right to bear arms. Texas is an open-carry state where carrying a gun like this with a permit is legal.

The Dallas Morning News posted a video that appeared to show Hughes standing in a crowd of protesters shortly after shots were fired.

And another man posted a video of Hughes handing his gun over to police after the incident began.

Once he discovered he was a suspect, he turned himself over to police. He told KTVT he was released after being questioned for about 30 minutes.

It's a good example of social media working to get the right information to the public, but it doesn't always work out that way.

In the days following the Boston Marathon bombing, cybersleuths misidentified several people as suspects, leading to death threats for the individuals and their families.

This video includes clips from Twitter / @DallasPD and WFAA and images from Getty Images. Music provided courtesy of APM Music.