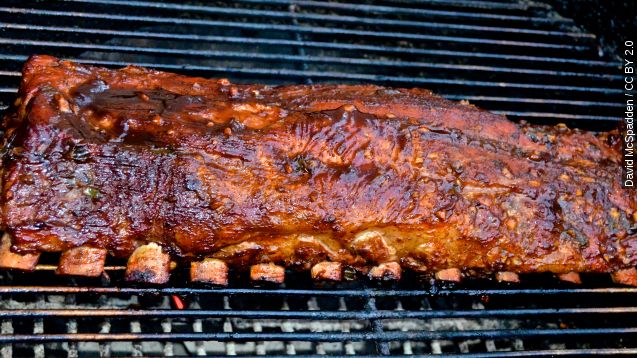 SMS
Man Escapes Fire, Talks About Saving His BBQ Ribs
By Matt Moreno
By Matt Moreno
September 2, 2015
A California man escaped an apartment fire with his family and a rack of ribs. He then spoke, with the ribs in hand, to a local TV station.
SHOW TRANSCRIPT

If you're a local news reporter and you're looking for an interview that could be the Internet's next big thing, start talking to people after they've just escaped a fire.

Fresno, California's KMPH was covering a local apartment fire when Robert Wright approached one of the station's photographers with an unusual fire escape story.

"I got my kids out, that was the first thing I got, and then I thought about my ribs. I didn't want to let my ribs burn and stuff because I take pride in what I do. It was like 3 o'clock in the morning. I was hungry," Wright told KMPH.

The Internet has fallen in love with Wright's interview so much that it's already made international headlines.

All right, to be fair, those do look like some delicious ribs. We're just not sure why he's still holding them. Still, Wright is hardly the first one to admit the influence of an early morning's craving on a fire.

In April 2012, five units were damaged at an Oklahoma City-area apartment complex. KFOR arrived on the scene to find Sweet Brown.

"I woke up to get me a cold pop but then I thought somebody was barbecuing. I said 'Oh, Lord Jesus, it's a fire.' Then I ran out, I didn't grab no shoes or nothing, Jesus. ... Ain't nobody got time for that," Brown told KFOR.

"Why did you think there was a barbecue going on at 3:30 in the morning?" Daniel Tosh asked.

"It was the day before Easter. ... You know how people barbecue in the morning? It's Easter," Brown told Comedy Central's "Tosh.0."

Yes, Sweet Brown. Thanks to Robert Wright's interview with KMPH, we know how people barbecue in the morning. Let's just hope those ribs were worth it.