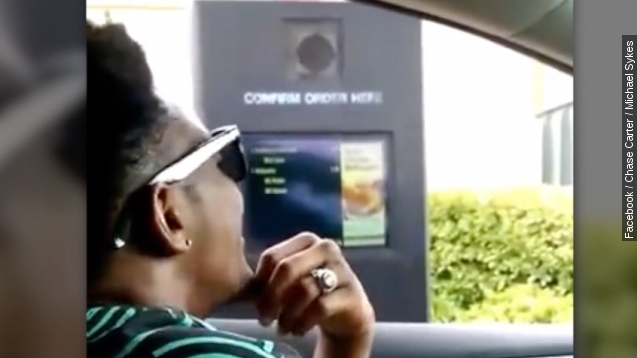 "Anything else?" the McDonald's worker asked.

"Did you want the snack size or the regular size?" the McDonald's worker asked.

"Give me the medium," he sang.

Chase Carter decided to surprise a Mississippi McDonald's worker by singing his order instead of, well, speaking it.

"Thank you baby girl, baby girl," Carter sang as he pulled away.

We'd be impressed by Carter's singing chops, but the drive-thru worker didn't seem to be. Carter told Newsy on Skype she definitely wasn't expecting it.

"Shocked. They really think I'm joking around like as far as placing my order. I'm like, 'no, I'm really ordering like this,'" Carter told Newsy on Skype.

Carter's friend Michael Sykes shot the video, and said this has been "overwhelming." And Carter himself didn't even realize he was going viral until a friend at work told him.

"I didn't even know and people at work was like 'did you know you was on the news?' and I'm like 'no, I'm not on the news,'" Carter said on Skype.

Carter has done the singing stunt at one Burger King and two McDonald's.

"I got to the window and they were just laughing. They was like, 'you can really sing, though, you need to be in somebody's studio!'" Carter said.

Carter said he plans on doing the drive-thru singing surprise more often, and that he never expected his video to go viral.

Music runs in Carter's family, and he says he recently released a new single on Sound Cloud. You can also check him out on Facebook.

This video includes an image from Getty Images, video from Facebook / Chase Carter / Michael Sykes, and music from Kevin MacLeod / CC BY 3.0.