Man Scales Trump Tower To Get A Meeting With The Donald 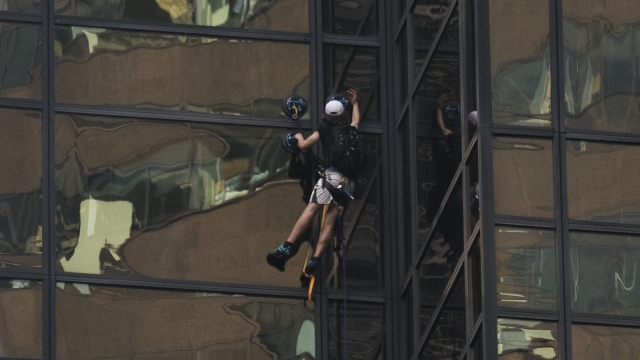 By Grant Suneson
August 10, 2016
A man became an internet sensation after climbing Trump Tower in New York City before being grabbed by police. He reportedly wants to talk to Trump.
SHOW TRANSCRIPT

For a fleeting moment on Wednesday, the internet was captivated by a man reportedly named Steve who used suction cups to climb Trump Tower in New York City.

The man was on the tower for more than two hours before being pulled to safety.

In a press conference, New York City police confirmed the climber posted a video discussing his plans on Tuesday.

"I am an independent researcher seeking a private audience with you to discuss an important matter. I guarantee that it is in your interest to honor this request," the man in the video said.

He said he climbed the tower to get Trump's attention because he likely wouldn't be able to get in contact with Trump any other way. He asked viewers to make the video viral and encouraged them to vote for Trump in November.

It's unclear exactly what he wanted to talk about with Trump, but he'll probably have to talk with police for a while first.