Man Charged After Lifting Off In Balloon-Covered Lawn Chair 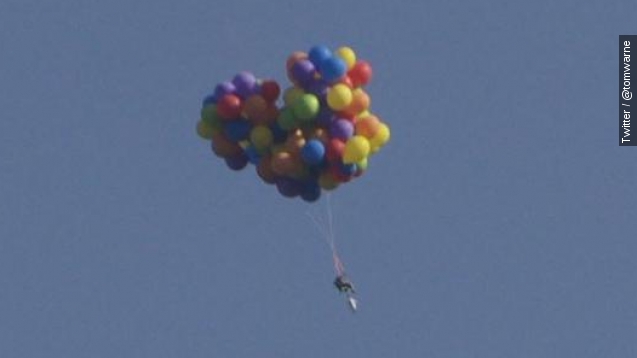 SMS
Man Charged After Lifting Off In Balloon-Covered Lawn Chair
By Ben Lawson
By Ben Lawson
July 6, 2015
A Canadian man strapped some balloons to a lawn chair and went on a brief flight Sunday that ended with his arrest.
SHOW TRANSCRIPT

We have all seen "Up" and gotten a few ideas of our own but never had the guts to carry them out ourselves.

Well, one Canadian man strapped a whole bunch of balloons to a lawn chair and went for it this weekend.

CBC reports skydiver Daniel Boria intended to fly himself to the Calgary Stampede, an annual two-week rodeo, but the weather didn't cooperate and he parachuted to the ground about a mile from the event.

So his flight turned out OK, but that doesn't mean you should try this at home. Police were not amused by the stunt, which was meant to advertise Boria's cleaning company.

The Calgary Sun reports he faces charges of mischief causing danger to life and mischief to property. He was detained by police Sunday evening and released on Monday.

But people just keep trying these balloon stunts. A professional skydiver flew 8,000 feet into the air with balloons tied to a lawnchair before parachuting down just last year.

And two men in Oregon attempted to fly to Montana in 2012 but had to land early due to a thunderstorm.