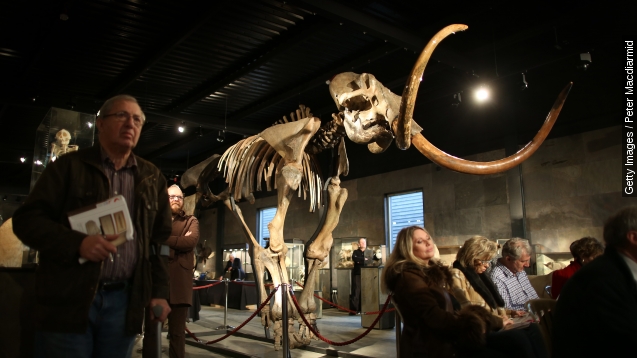 You know how in "Jurassic Park" scientists take dinosaur blood from a prehistoric mosquito preserved in amber to clone the dead-and-gone giants back into existence?

Not to alarm you or anything, but scientists are doing something similar right now with the woolly mammoth.

Most recently one of the groups — yes, there's more than one — might have successfully isolated what makes a mammoth so different from elephants. The key was in resurrecting a mammoth gene.

Vincent Lynch, an evolutionary biologist who worked with the group, told the Los Angeles Times, "We looked for the changes that make a woolly mammoth a woolly mammoth." (Video via The University of Chicago Medicine)

After all, mammoths were very similar to the modern elephant. The biggest difference — aside from all that hair — is that today's elephants tend to live in hot climates and the mammoths survived in the extreme cold. (Video via BBC)

The study, published in Cell Reports, said researchers sequenced three Asian elephants' genomes and two wooly mammoths' genomes. They ended up finding multiple mammoth-specific features, but only one of them stood out.

One mammoth gene had three functions — all dealing with how the body might adapt to climate — including sensing temperature, fat digestion and absorption, and regulating hair growth.

So, what’s next? Crossing the DNA of today's elephants with this particular mammoth gene? And then building a prehistoric-themed park?

Even though some researchers have started trying to do exactly that — not the theme park, the other thing — Lynch told NPR he doesn't think it'll work.

"You could change this one gene in an elephant and maybe make it woolly mammoth-like with respect to some things," said Lynch.

"Trying to recreate a mammoth in all it’s woolly glory would require a ton of other genetic changes — so many that scientists don't have the technology to do it," said NPR reporter Nell Greenfieldboyce.

But that’s probably for the best. Aside from the ethical dilemma of actually resurrecting an extinct creature, we're not exactly sure what we'd even do with a massive creature that used to be dead — put it in a zoo I guess.