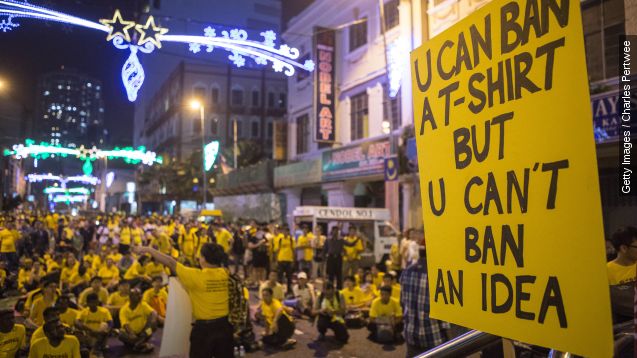 SMS
Malaysian Protesters Face Government Pushback This Weekend
By Samantha Crook
By Samantha Crook
August 29, 2015
The group behind this weekend's protests in Malaysia has called for the resignation of the prime minister over corruption allegations.
SHOW TRANSCRIPT

Malaysian protesters continue to rally and voice their frustration with the country's prime minister over allegations of corruption.

Malaysians are expected to protest throughout the weekend in anticipation of the nation's 58th independence day Monday. (Video via CNBC)

Prime Minister Najib Razak is suspected of funneling hundreds of millions of dollars in public money to a bank account in his name. His defense that the money was simply a massive campaign donation has only fueled public outcry. (Video via CNN)

Public response to suspected government corruption has been ongoing, largely from a a coalition called Bersih which aims to reform the electoral process in Malaysia. (Video via Mediarakyat)

Previous demonstrations by the group have been broken up by tear gas and water cannons. (Video via The Star Online)

This time around, the group's signature yellow t-shirts have been banned and the rally has been deemed illegal.

The group aims to be non-partisan, but the substantial power of Razak's party is a concern for many. Bersih recently changed its demand from having the prime minister take leave during the investigation into the money he received to having him resign altogether. (Video via BBC)

Overall demands include more fair representation of political parties in state-funded media and a minimum campaign period of 21 days. (Video via RTM)

Malaysia's Foreign Ministry announced that it will identify Malaysians who participate in demonstrations outside of the country and take legal action against them. The country's Deputy Foreign Minister said Malaysia is not a dictatorship, but protester actions could hurt the reputation of the country abroad. (Video via The Star Online)