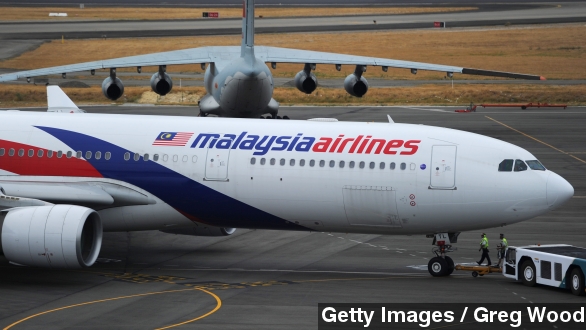 SMS
Malaysian Gov't Rules MH370 Disappearance An Accident
By Matt Moreno
By Matt Moreno
January 29, 2015
The Malaysian government says the plane is believed to have went down in a remote area of the Indian Ocean and everyone on board was killed.
SHOW TRANSCRIPT

There was no conspiracy and no foul play — the downing of Malaysia Airlines flight 370 was an accident, according to an announcement by the Malaysian government Thursday.

The aircraft disappeared March 8, 2014 and no traces of it have been found since.

Thursday's announcement opens the door for the family members of the 239 people on-board, all presumed to be dead, to now receive compensations. The value of those compensations is unclear right now. (Video via euronews)

Al Jazeera reported in June the families of seven passengers started receiving $50,000, while the International Business Times says a family member in October rejected a payout of $64,000.

As the BBC reports, many families of the missing passengers are rejecting compensation due to distrust of the government.

"What they worry is that the Malaysian government will ultimately just payout the compensation and stop the search altogether and they will not get the kind of closure they have been looking for," said BBC reporter Jennifer Pak.

During Thursday's announcement, the Malaysian government said it's believed the plane exhausted its fuel and went down in a remote area of the southern Indian Ocean, far from any possible landing locations.

The Malaysian government says the search and recovery of the missing plane will continue.

This video includes images from Getty Images and the Australian Maritime Safety Authority.