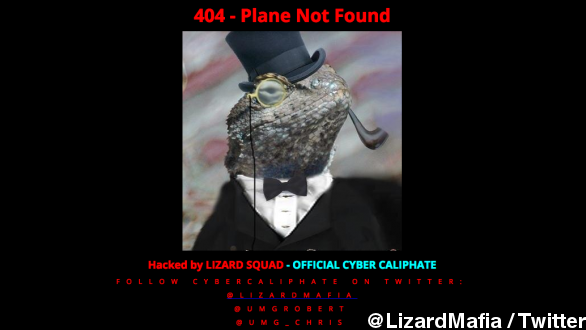 Sunday, Malaysia Airlines's website faced what appears to be a series of hackings.

When we first visited the site, it displayed an image of a lizard in a top hat, suit and monocle with the heading "404 - Plane Not Found." The purported "Lizard Squad Anthem" played in the background.

Hacker group Lizard Squad took credit for the breach on the site and on the group's Twitter account. There's no clear indication why the group chose to target Malaysia Airlines, but a tweet a few hours before the hack said the group was looking to "have some fun today."

Lizard Squad is, of course, the group that claimed responsibility for both Playstation and Xbox online service outages over Christmas day.

Initially, a report from The Wall Street Journal displayed an entirely different version of the site from what we observed when visiting. At the same time, the group claiming responsibility for the hack called themselves the "Cyber Caliphate." The page was later updated with the top-hat-wearing lizard, and the text was changed as well; Lizard Squad referred to themselves as the "official Cyber Caliphate."

The Journal also noted the site's title contained the phrase "ISIS will prevail." That text was replaced with the phrase "Lizard Squad will prevail." Despite the changes made to the website, it remains unclear if Malaysia Airlines was indeed attacked by two separate groups.