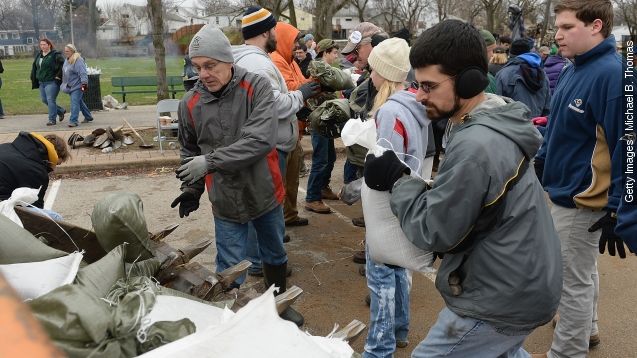 SMS
Major Floods Threaten 19 Levees Along Mississippi River
By Ryan Biek
By Ryan Biek
December 30, 2015
Citizens in some Missouri towns have already been urged to evacuate, and the state's governor has declared a state of emergency.
SHOW TRANSCRIPT

Rare winter river swells are threatening to breach 19 federal levees along the Mississippi River, and many residents in Missouri and Illinois are being forced to leave their homes.

Flood warnings have been in effect in Illinois, Missouri and Oklahoma. Missouri has been in the most danger — at least 13 people have been killed, and Gov. Jay Nixon has declared a state of emergency. (Video via CBS)

"Those problems they have now are going to get much, much worse. That rain that we had before in those rivers are rising," Gov. Nixon said at a press conference. (Video via NBC)

The National Weather Service predicts the Mississippi River will crest between Thursday evening and Friday morning. But some Missouri towns, like West Alton, have already been significantly flooded. (Video via KSDK)

One meteorologist told NBC, "If a levee was to give way, the entire Mississippi would flood out." Downstream cities like New Orleans could be affected within a week.