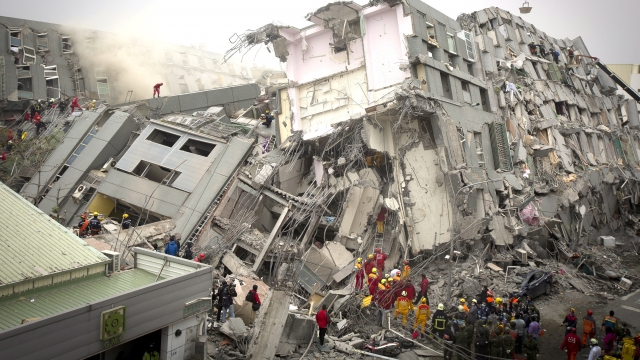 A magnitude-6.4 earthquake in southern Taiwan killed at least 11 people, and aftershocks were reportedly felt around the country.

Hundreds were reportedly injured in the quake, and at least 30 people were missing as of Saturday morning. (Video via TVBS)

The earthquake struck near the coastal town of Tainan, which has a population of about 1.8 million. Several buildings reportedly fell including an apartment complex that housed at least 250 people.

According to the BBC, more than 200 people had to be rescued from the apartment. Taiwan's interior minister said officials will investigate if the complex's structure was in line with code.

The U.S. Geological Survey says the earthquake originated from a pretty shallow spot — just 6 miles underground — making the damage worse than normal for an earthquake this size. (Video via ETtoday)

An American teacher living in the country told the Los Angeles Times: "It was not a rolling gentle earthquake, but a violent jerking motion. The walls were shaking, and you could hear the building and windows moving. It lasted at least a minute with swaying afterwards."

Taiwan is no stranger to earthquakes — it's located between two tectonic plates. In 1999, a magnitude-7.6 quake killed more than 2,300 people in the country. (Video via CNN)