Magnetic Satellite 'Tractor Beams' Won't Be What You Think 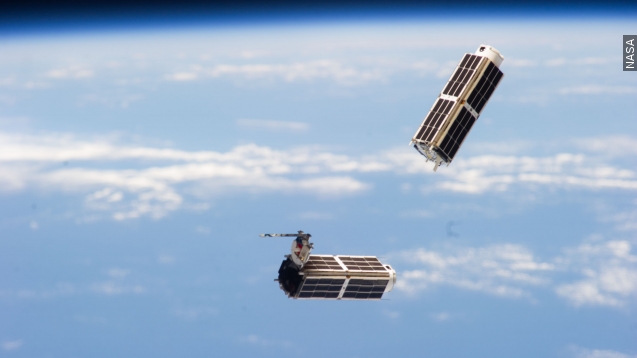 Maybe you saw the headlines: Tractor beams coming to orbit near you.

It's true NASA has signed an agreement with Arx Pax, the company behind the Hendo hoverboard, to develop satellite control applications using the company's magnetic field architecture. (Video via Hendo Hover)

It will work the same way the hoverboard does, generating magnetic fields that push or pull against the conductive magnetic surfaces of tiny satellites called CubeSats.

"The device will draw as well as repel satellites at the same time, meaning it will hold a satellite at a distance and won't allow it to move away or toward the capture device," the company said in a press release.

But this will be small-scale: CubeSats are tiny enough to launch by hand, in some cases, and the magnetic fields will only be good for adjustments "on the order of centimeters," according to Arx Pax founder Greg Henderson. (Video via NASA)

But magnetic fields could be used to arrange precise formations of satellites so their instruments can make more accurate measurements.

Or, as Fortune notes, they might help with debris cleanup.

Some proposals envision arrays of CubeSats carrying nets between them to wrangle space junk out of Earth's orbit. Magnetic alignment fields might speed up such a process.

NASA has a vested interest in keeping such debris under control. It's not "Gravity" levels of bad up in orbit, but space trash can still be dangerous. (Video via Warner Bros. Pictures)

Old satellite components, the odd bit of spacewalk equipment, even flecks of paint can get moving over 17,000 miles per hour. It's not something you want hitting the windows. (Video via NASA)

Arx Pax hasn't commented on the viability of a debris capture system, or any other specific applications for its control system. The company will be working with NASA on a prototype for the next couple of years.