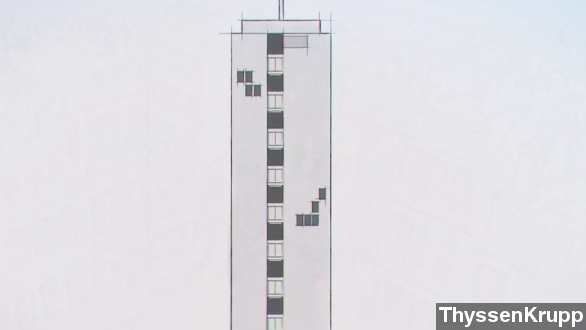 SMS
Magnetic Motors, Not Cables, Power This Elevator
By Evan Thomas
By Evan Thomas
November 28, 2014
Imagine an elevator without cables. ThyssenKrupp has drafted an elevator concept that would cruise on linear magnetic motors.
SHOW TRANSCRIPT

Normally when the elevator cable fails it’s bad news. But German corporation ThyssenKrupp is designing elevators that don’t need them to begin with.

Instead, they’ll cruise on linear magnetic motors, like the ones maglev trains float on. (Video via NTDTV)

Not quite as quickly, of course. According to the Financial Times, the cars will have a top speed of five meters, or about 16 feet, per second.

That’s not setting any speed records. Elevators in the Shanghai Tower will climb at just over 40 miles per hour when it opens for business —more than three times faster than ThyssenKrupp’s prototypes.

But the lack of cables means they can do other tricks, too — like move horizontally and run in circuits through the building instead of being confined to vertical shafts. (Video via ThyssenKrupp)

ThyssenKrupp says they’ll be more efficient as a result. The company expects capacity to increase by 50 percent, usable building space to increase — and wait times to decrease. The rotating elevator cars means any given rider shouldn’t have to wait for the elevator for more than 30 seconds.

Thought it might not seem like a lot, but that time stacks up. ThyssenKrupp writes “Per year, New York City office workers spend a cumulative amount of 16.6 years waiting for elevators, and 5.9 years in the elevators.”

Quartz writes the standard elevator might be hold back architecture, as well.

“Traditional shafts can occupy 40% of a building’s total footprint, and the limits of current designs usually mean that taller buildings have longer waits for the next lift.”

ThyssenKrupp expects to have a prototype floating around by 2016.

This video includes images from Getty Images and leniners / CC BY NC 2.0 and music from Space Invaders v Psychadelik Pedstrian / CC BY NC 3.0.