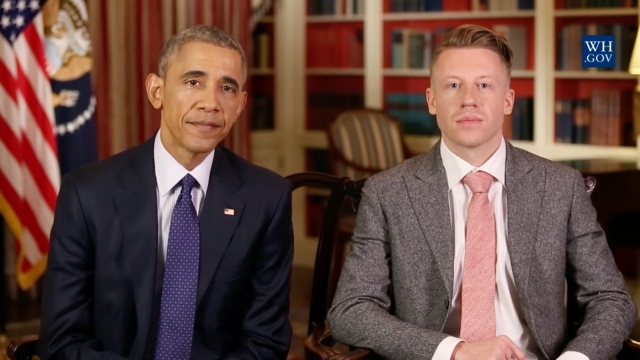 A Grammy-winning artist joined President Obama in his weekly address.

Rapper Macklemore talked about his struggle with prescription drug abuse and losing his friend to an overdose.

"Addiction is like any other disease — it doesn't discriminate.  It doesn't care what color you are, whether you're a guy or a girl, rich or poor. ... This doesn't just happen to other people's kids or in some other neighborhood. It can happen to any of us," the rapper said.

The meeting was part of Obama's push to curb the abuse of opioids, including prescription pain relievers and heroin. He has called for $1.1 billion in new funding to provide treatment for those with opioid addictions.

The U.S. saw a 200 percent increase in the rate of overdose deaths involving opioids from 2000 to 2014, according to the Centers for Disease Control and Prevention. Heroin accounted for more than 10,500 of those deaths in 2014.

Macklemore said more needs to be done to offer treatment to those struggling with addiction, and the president agrees.

"My administration is working with communities to reduce overdose deaths, including with medication. We're working with law enforcement to help people get into treatment instead of jail. And under Obamacare, health plans in the Marketplace have to include coverage for treatment," Obama said.

The visit will be featured in Macklemore's MTV documentary this summer.

This video includes clips from the White House and images from Getty Images, Centers for Disease Control and Prevention and Twitter.

A previous version of this story incorrectly stated Macklemore was the first person outside the administration to participate in Obama's weekly address.