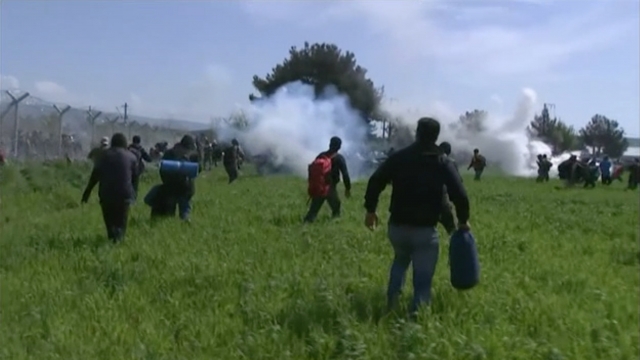 Macedonian police fired tear gas, rubber bullets and stun grenades into a crowd of hundreds of migrants at the Greek border Sunday.

The clash broke out after migrants — located in a large camp in northern Greece — reportedly heard rumors that Macedonia would be opening its borders. Macedonian police denied the rumors, and migrants began trying to scale the fence.

Winds blew tear gas into the camp, where more than 10,000 migrants have been stranded since Macedonia and other Balkan countries closed their borders in February.

A spokesman from an aid organization told the BBC it treated 300 injured people, including young children, some of whom were in shock or were having respiratory problems caused by tear gas.

A spokesman for the Greek government said the Macedonian police's response was "a dangerous and deplorable act."

Tension between migrants and authorities has intensified since the European Union began requiring mass deportations of migrants who arrived after March 20. Last week, Greece began deporting those people to Turkey.

This video includes images from Getty Images and clips from BBC, CNN and Sky News.