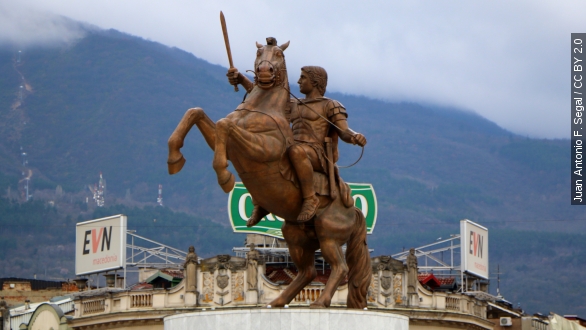 The tiny Balkan country of Macedonia saw a tumultuous week of protests and violence. And it was capped off with a 28-hour police operation over the weekend that might have left the country less politically stable than before.

The government says police launched an attack Saturday on a terrorist group hiding in the city of Kumanovo. The fighting lasted into Sunday and ended with a reported eight police officers killed and dozens wounded. About 14 gunmen were reportedly killed and 30 captured. (Video via Al Jazeera)

Police say the men planned to carry out attacks on government institutions and on civilians and that they belonged to a rebel group of ethnic Albanians from Kosovo. (Video via Macedonian Police)

Macedonian Prime Minister Nikola Gruevski said the militants also carried out an attack on a police station a month ago and that the successful operation this weekend had potentially saved thousands of lives. (Video via Alsat-M)

But not everyone believes the prime minister. The country's capital has seen massive protests this week, which often turned violent, over the 2011 killing of a 22-year-old man who was beaten to death by police. (Video via Radio Free Europe/Radio Liberty)

Tuesday, the country's opposition leader released audio recordings from 2011 he says capture Gruevski and other officials discussing how to cover up or spin the young man's death. The announcement lead to the protests and to calls for the prime minister's resignation. (Video via 24 Vesti)

That leads back to this weekend's violence. There's widespread suspicion that Gruevski in some way fabricated the Kumanovo operation, inciting racial tensions by attacking an Albanian neighborhood, all to deflect criticism of his government.

Journalists, analysts and politicians repeated the claim on Twitter, and a local writer accused the government of trying to stifle an opposition rally set for May 17 by creating a state of emergency.

Even before the fighting began, a former EU representative to Macedonia told The Financial Times Gruevski might be capable of that kind of deception, saying, "The government will organise counter-protests. They may even engineer violence and unrest and blame it on the opposition."

Gruevski said in his speech that the operation wasn't about ethnic tensions but about those who wish the country harm. NATO Secretary General Jens Stoltenberg has called for a transparent investigation into the weekend's events.