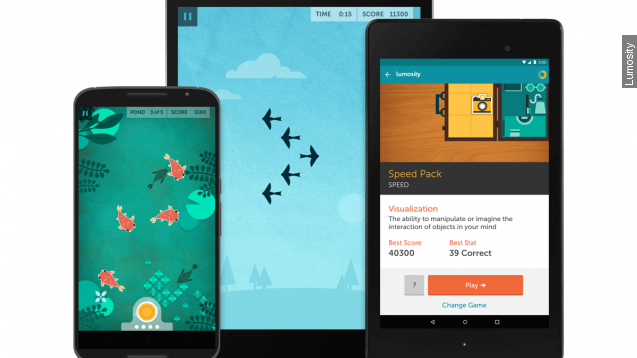 SMS
Lumosity To Pay $2M For Deceptive 'Brain Training' Claims
By Briana Koeneman
By Briana Koeneman
January 5, 2016
The company is accused of making false claims in its advertising about the ability of Lumosity games to boost a user's performance at work or school.
SHOW TRANSCRIPT

The company that developed Lumosity "brain training" games has agreed to pay $2 million to settle federal allegations it deceived users about the games' benefits. (Video via Lumosity)

On Tuesday, the Federal Trade Commission said Lumos Labs' advertisements wrongly suggested that playing the games a few times a week could improve a user's performance at work or school and even delay progress of some serious medical conditions.

The director of the FTC's Bureau of Consumer Protection said in a statement, "Lumosity preyed on consumers' fears about age-related cognitive decline, suggesting their games could stave off memory loss, dementia, and even Alzheimer's disease. But Lumosity simply did not have the science to back up its ads."

Lumosity users pay anything from $14.99 for a monthly subscription to nearly $300 for a lifetime membership.

But if you signed up for the company's auto-renewal program between Jan. 1, 2009, and Dec. 31, 2014, you will be notified of the FTC action and given an easy way to cancel your subscription. (Video via Lumosity)

According to the complaint, Lumosity aggressively advertised its brain-training games through TV ads, blog posts, social media and used Google AdWords to drive traffic to its website.

The company also allegedly didn't disclose that some user testimonials were solicited through contests that promised pretty big prizes, like a round trip to San Francisco. (Video via Lumosity)

Still, Lumos Labs defended its programs in a statement to NBC: "Our focus as a company has not and will not change: We remain committed to moving the science of cognitive training forward and contributing meaningfully to the field's community and body of research."