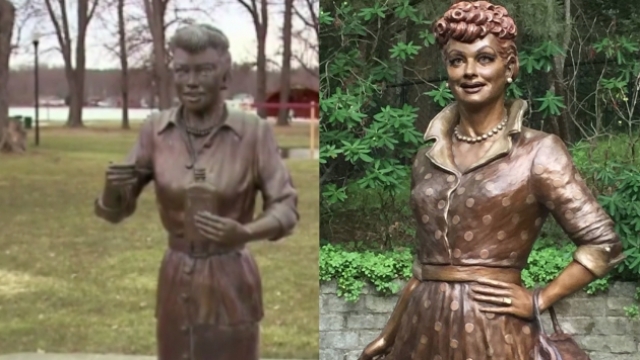 Beloved actress and comedian Lucille Ball is getting a long-overdue tribute in her hometown.

Celoron, New York, previously tried to honor Ball with a statue in 2009, and it went over about as well as Lucy’s stint in the candy factory.

The statue was dubbed "Scary Lucy" because — well, just look at it. Even the original artist admitted he didn't quite capture Ball's essence and apologized for the sculpture.

SEE MORE: Someone Donated A Selfie Statue To This Town, And Locals Aren't Happy

Outraged by the unfortunate monument, Lucille Ball fans launched a campaign to make a new statue. Seven years later, Ball finally has a likeness that actually looks like her.

Sculptor Carolyn Palmer spent nine months perfecting every detail of the statue, and Celoron residents seem pleased with the results. The statue was unveiled Aug. 6 on what would have been Ball's 105th birthday.

But Scary Lucy isn't going anywhere. The original statue became something of an icon itself, so Celoron decided to leave it in the park.

This video includes images from Getty Images and Carolyn Palmer and clips from WKBW and WIVB.