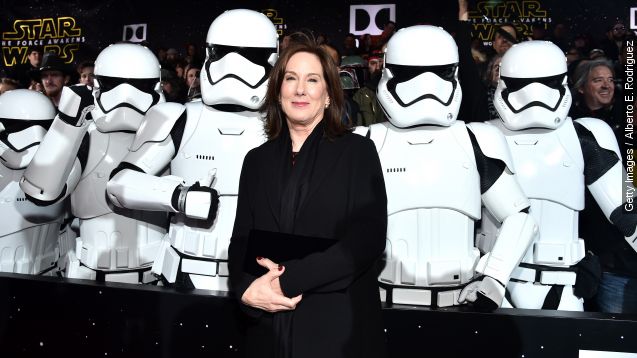 SMS
Lucasfilm Exec Says 'The Force' Helped Bring This 'Star Wars' To Life
By Jamal Andress
By Jamal Andress
December 15, 2015
"Star Wars: The Force Awakens" boasts some of the biggest names in the business, and some of those names share a few eerie connections.
SHOW TRANSCRIPT

"Star Wars" fandom and anticipation reached a fever pitch at the "Star Wars: The Force Awakens" Hollywood premiere. But the most emotional moment of the night happened before the movie even started.

"Everyone involved in 'The Force Awakens' knows how lucky we've been to carry forward this legacy," said Lucasfilm President Kathleen Kennedy. (Video via Flicks and the City)

Lucasfilm President Kathleen Kennedy spoke to the star-filled audience before the film began and explained how the Force has played a real-life role in this seventh installment.

"In 1962, an 18-year-old boy named George Lucas was drag-racing his car. He skidded out of control and wrapped his hotrod around a tree in Modesto. My step-brother's grandfather pulled George from the wreckage that nearly killed him," Kennedy said.

And the coincidences don't stop there. Kennedy also said while working for Steven Spielberg, she hired a 16-year-old J.J. Abrams to restore a 1982 box of super 8 movies.

The film will debut on more than 4,100 screens nationwide. That's the most screens of any movie ever released in December.

"You wouldn't have to change for me, Bella," a character in "The Twilight Saga: Eclipse" says.

But it's shy of the widest release ever. That honor goes to "The Twilight Saga: Eclipse," which debuted on more than 4,400 screens. Most of the widest releases of all time took place over the summer, but this "Star Wars" installment and the "Hunger Games: Mockingjay Part 2" release are the only winter movies to get a launch on this scale.

Analysts are expecting "The Force Awakens" to have a $185 million to $200 million debut weekend at the box office.