LSU's Ben Simmons Is Declaring For The NBA Draft, Surprising No One 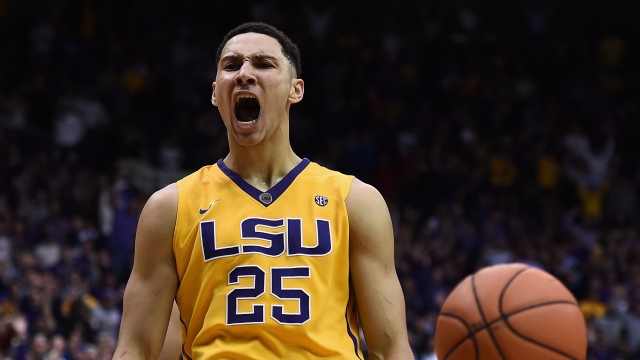 SMS
LSU's Ben Simmons Is Declaring For The NBA Draft, Surprising No One
By Jamal Andress
By Jamal Andress
March 21, 2016
While LSU struggled this season, Simmons was the only player in the country to average more than 19 points, 11 rebounds and four assists this year.
SHOW TRANSCRIPT

LSU's Ben Simmons is entering the NBA draft, surprising no one.

While the Tigers struggled all season and didn't make the NCAA tournament, Simmons was the only player in the country to average more than 19 points, 11 rebounds and four assists on the season.

Standing at 6 feet 10 inches with combo guard skills, Simmons was a major target for NBA scouts before he ever stepped on the floor. The fact that he largely lived up to the hype pushed his draft stock even higher.

"I think they were chanting GPA — did that surprise you?" a reporter asked.

"I mean, I'm not worried about that." Simmons responded.

Despite clearly being one of the best players in the country, Simmons was declared ineligible for the Wooden Award —  given to the best college basketball player in the country — reportedly due to academic issues.

While many are expecting Simmons to go No. 1 in the draft, Duke's Brandon Ingram has been a close second all season and has the advantage of further showcasing his skills in the tourney.

Either way, the NBA draft will be held June 23, and Simmons' name will likely be called early on.