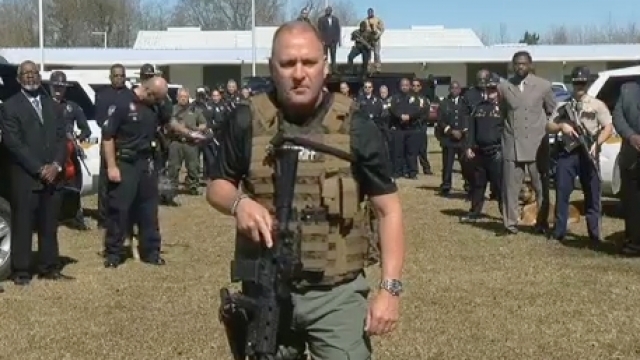 A sheriff's captain in Louisiana is going viral once again for calling out alleged gang members.

"If you raise your weapon to a man like me, we'll return fire with superior fire. ... I'll meet you on solid ground anytime, anywhere, light or heavy, makes no difference to me. You won't walk away," Capt. Clay Higgins says in his latest video.

Capt. Clay Higgins is warning the Gremlins Gang, which, according to KATC, is accused of murder, theft and drug-related crimes. The captain tells the suspects they will be "hunted" and "trapped."

Higgins goes on to describe the alleged gang members, who are all black men, as "animals." Seemingly anticipating some racial blowback, Higgins goes on to say, "This is not about race; it's about right versus wrong." He also invited several black community leaders to appear in the video.

Higgins is known for this type of straight-talking video, even earning him the nickname the "Cajun John Wayne." He quit a job as a businessman because he says he wasn't feeling fulfilled until joining law enforcement.

As for Higgins' most recent video, it's been viewed more than 11 million times.