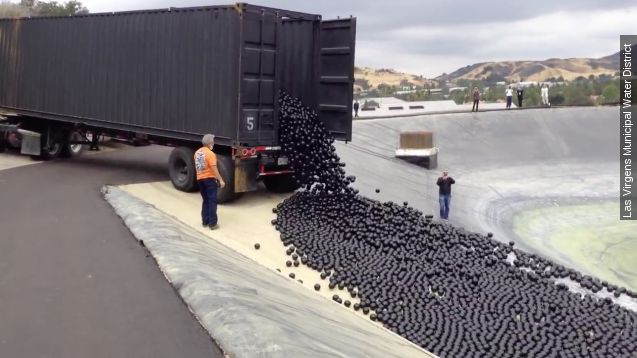 What are black, round, meant to save water and cost $34.5 million?

They're called shade balls and that's exactly what they do. The spheres, 4 inches in diameter, are meant to cut down on water evaporation from the Los Angeles reservoirs by simply floating on top of the water. (Video via Las Virgenes Municipal Water District)

"By reducing evaporation, these balls will conserve 300 million gallons of water each year, instead of just evaporating into the sky," said Mayor Eric Garcetti.

Oddly enough, California has used this method to conserve water before. It was originally used in 2008 to help with water quality, but the Los Angeles Department of Water and Power discovered it has the added benefit of reducing evaporation off the reservoir surface by 85-90 percent.

The 96 million shade balls covering the surface of the Los Angeles Reservoir cost about 36 cents each, and while this method seems a bit unorthodox, the mayor says the alternative options are much more expensive.

For example, according to the mayor's office, building two "floating covers" over the 175-acre reservoir would have cost upwards of $300 million.

Now in most instances, dropping more than $34 million worth of plastic into a large body of water would be frowned upon, but the LA Department of Water and Power says this plastic is made up of high-density polyethylene, so it's reportedly not harmful if it touches drinking water.

"This isn't gonna add to that kind of plastic pollution?" a CBS reporter asked.

"No nothing leeches out of it; nothing gets in the water," an official from the LA water department responded.

The need for something — anything — to help the state's water reserves is pretty drastic. According to the National Drought Mitigation Center, this is California's fourth straight year of severe drought, and it's affecting more than 92 percent of the state.