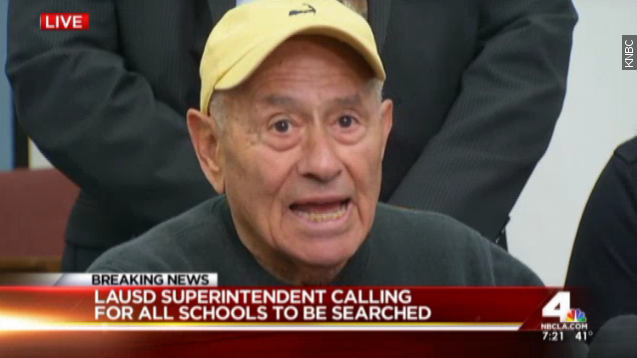 A school district spokesperson told reporters the threat was sent via email Monday evening to a school board member from an IP address in Germany.

Students and staff were told to stay away from all campuses early Tuesday morning. (Video via KABC)

School police said the FBI has been notified and the threat is being investigated. Officials say it was made specifically to LAUSD students and mentioned backpacks and other objects.

"I, as superintendent, am not going to to take the chance with the life of a student," LAUSD Superintendent Ramon Cortines said during a press conference.

Of course, the incident comes just two weeks after 14 people were killed in a mass shooting in nearby San Bernardino. (Video via KGTV)

LAUSD enrolls more than 640,000 students in kindergarten through 12th grade and is made up of more than 900 schools. (Video via KCBS)

New York City officials say they received a similar anonymous threat but concluded it was a "hoax."