Loretta Lynch Has Been Waiting A While For Confirmation 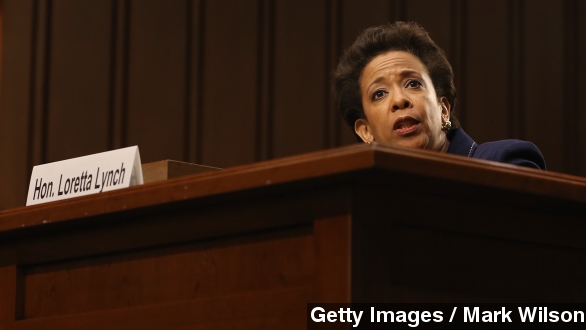 "It's pretty hard to be more qualified for this job than Loretta [Lynch]," President Obama said in November.

President Obama nominated Loretta Lynch to be the next U.S. attorney general back in November of 2014. It's been four months without confirmation.

"I had hoped to turn to her next week, but if we can't finish the trafficking bill, she will be put off again," Senate Majority Leader Mitch McConnell told CNN's Dana Bash Sunday.

And from the looks of it, she'll be waiting a little longer. That's Mitch McConnell, the top Republican in the Republican-dominated Senate, who in that role schedules the business of the chamber.

The trafficking bill McConnell cites as the reason Lynch will have to keep waiting to be confirmed is at a political stalemate over language that would keep federal money from funding most abortions.

To which Democrats, like ranking judiciary committee member Patrick Leahy, say, "The Senate can debate legislation and vote on nominations at the same time."

Except — Democrats are at least partially to blame for the delay. Remember — the president nominated her in November, and they could have confirmed her before the new Republican majority took over.

Lynch is currently the top federal prosecutor in Brooklyn and would become the first black woman to head the Justice Department. (Video via PBS)

Her nomination did pass the Senate Judiciary Committee in February. And when she does go up for a full vote, she's expected to be confirmed — but by the slimmest of margins.

"I certainly think that people who come to this country in a variety of ways can rehabilitate themselves and apply," Loretta Lynch said at a hearing in January.

So why the hold up? For some Republicans, it's the fact she wouldn't disavow President Obama's executive action on immigration.

"How would your tenure as attorney general differ from that of Eric Holder’s?” Texas Sen. Ted Cruz asked at hearings in January.

Others have suggested they're afraid they'll get another Eric Holder, the man Lynch would be replacing. He and Republicans didn't get along too well.

The irony there though — is Holder's staying in office until his successor is confirmed.