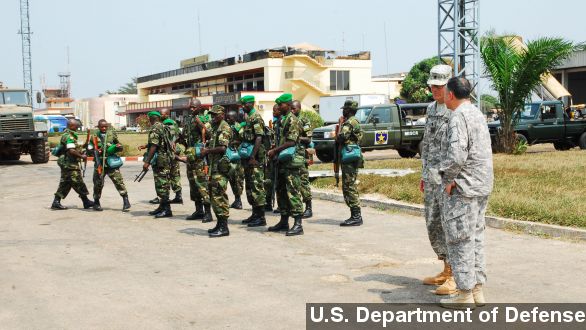 The State Department confirmed Tuesday that U.S. forces in the Central African Republic had taken a man claiming to be a senior member of the Lord's Resistance Army into custody.

According to State Department spokeswoman Jen Psaki, authorities were working to confirm the identity of the man claiming to be Dominic Ongwen, a senior LRA commander who was wanted by Interpol before ultimately turning himself in. (Video via U.S. Department of State)

That would be consistent with previous incidents of LRA soldiers surrendering, which seem to be increasing in frequency as the LRA weakens. (Video via CCTV)

U.S. forces have been deployed in the region since 2012, helping to train African Union forces on the hunt for the LRA and, in particular, the group's leader, Joseph Kony. (Video via U.S. Department of Defense)

But two years on, Kony is yet to be captured, and the LRA continues to be active.

In particular, the group targets internally displaced persons camps, raiding them for supplies and often kidnapping children to conscript into the LRA. (Video via U.S. Department of Defense)

Part of the reason Kony has evaded capture is that the group has been active in the Central African Republic, which in addition to being heavily forested is also rife with internal conflict between rebel groups and government forces. (Video via France 24, BBC)

But some observers argue the focus on Kony, driven by the Kony 2012 viral video from a couple years ago, is missing the bigger picture. (Video via Invisible Children)

A writer for The Guardian argues the focus on Kony has overshadowed the broader crisis in the Central African Republic, and says it looks "as if Washington has learned the lessons of a failed viral YouTube video rather than genocide."

Thousands of people have died in the conflict in the Central African Republic, between Christian and Muslim militias as well as the CAR's government, and the international response has been limited. (Video via Vice)

Nevertheless, the State Department says Ongwen's capture could represent a "historic" blow and said the U.S. and allies continue to make progress toward putting an end to the LRA.