Looming Railway Shutdown Could Cost US $30B 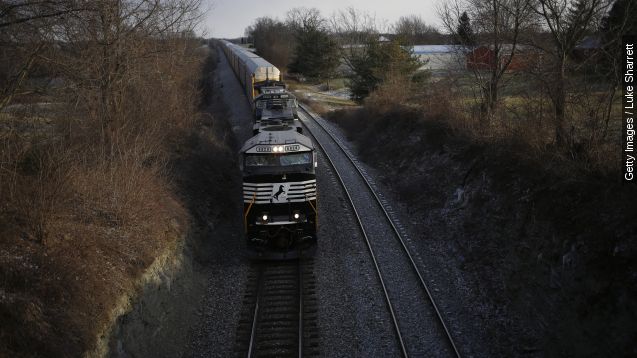 SMS
Looming Railway Shutdown Could Cost US $30B
By Jamal Andress
By Jamal Andress
October 1, 2015
The U.S. is facing a potential railway shutdown on Jan. 1, 2016, that could hurt the economy more than 2013's government shutdown.
SHOW TRANSCRIPT

After avoiding another government shutdown by just a few hours, Congress has yet another economic fire to put out.

The U.S. is facing a potential railway shutdown on Jan. 1, 2016 — a shutdown that American Chemistry Council says would be more detrimental to the economy than the government shutdown of 2013.

To be fair, those figures are based on a monthlong railroad shutdown. The government shutdown of 2013 lasted only 16 days.

The reason for the potential shutdown is a collision avoidance system called positive train control. In 2008, Congress ordered all the railroad companies to install the system by the end of 2015.

"With a functioning positive train control system, as that train approached that curve, the technology would have actually slowed the train down," said former Federal Railroad Administrator Joseph Szabo.

But executives from major railway companies — like BNSF, Union Pacific and CSX — say the 2015 deadline isn't feasible, and the chairman of the Senate Commerce Committee is urging Congress to extend it.

Lawmakers have drafted a bill to extend the deadline until 2018, but if that bill doesn't pass, railways around the country could see gradual shutdowns in the coming months, just in time for the holiday season.