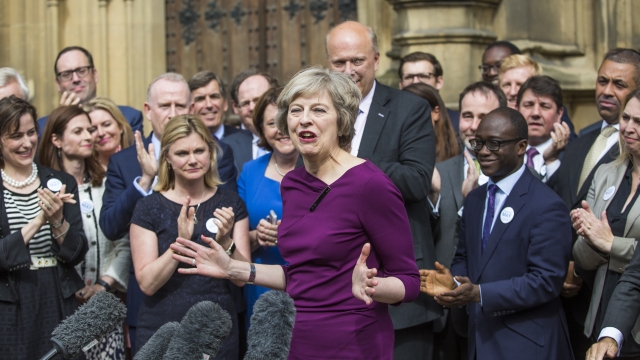 SMS
Looks Like The UK Has Its New PM (She's The Only Candidate Left)
By Ryan Biek
By Ryan Biek
July 11, 2016
Candidate Andrea Leadsom ended her campaign Monday, and David Cameron announced he'll step down Wednesday. This leaves Theresa May to take the wheel.
SHOW TRANSCRIPT

It looks like the United Kingdom has its new prime minister, now that Theresa May is the only candidate left. Her opponent, Andrea Leadsom, ended her campaign Monday.

Leadsom said: "Theresa May carries over 60 percent of support from the Parliamentary party. She is ideally placed to implement Brexit on the best possible terms for the British people, and she has promised that she will do so."

The day before her withdrawal, Leadsom apologized to May for her controversial argument that being a mother would make her a better prime minister.

May has served as the country's home secretary since 2010. She actually supported the "remain" side in the Brexit referendum but is also considered a Euroskeptic and didn't advocate prominently for the staying in the European Union.

May said, "Brexit means Brexit, and we're going to make a success of it." Among other issues, May also promised to address racial inequality and laid out a plan to put consumers and workers on the boards of directors for major companies.

The Conservative Party, which both May and Leadsom belong to, has typically been the party for enterprise. But May has said it can't be "anything goes" for big business.

It was not immediately clear if there will still be a vote now that Leadsom has pulled out of the race. Members of the Conservative Party had already whittled down the field from five candidates to those two.

David Cameron announced later on Monday that he'll be stepping down as prime minister on Wednesday.

The U.K.'s formal withdrawal from the European Union, and the negotiation process that goes with it, won't happen before Cameron's successor is put in office.