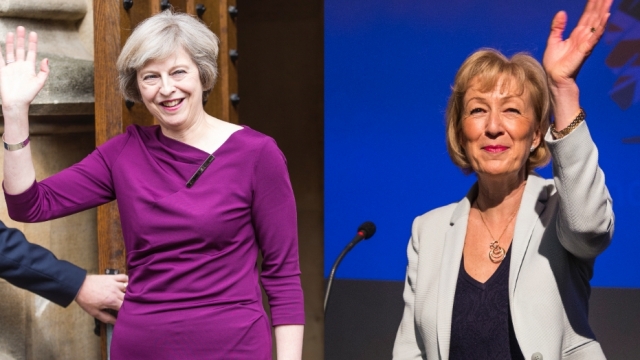 SMS
Looks Like The Brexit Problem Will Be A Woman's Job To Solve
By Katie Link
By Katie Link
July 7, 2016
Together, Theresa May and Andrea Leadsom knocked out Michael Gove.
SHOW TRANSCRIPT

Now that the men responsible for Brexit have exited the political stage themselves, it looks like a woman will be left to clean up their mess.

Meet Theresa May and Andrea Leadsom. They're the two Conservative Party candidates still left in the running to take over as prime minister. Here's a quick glance at how they got here.

May has been a member of Parliament for nearly two decades. She also serves as the home secretary.

SEE MORE: Theresa May Could Be The UK's Next Leader; So, Who Is She Again?

Prior to a career in politics, May worked as a financial consultant. She didn't vote for the Brexit but has promised to carry it out.

People seem to think she's a good pick due to her experience and reputation for toughness.

Leadsom has been an MP since 2010 and serves as the energy and climate change minister.

She has a background in banking and supported the U.K. leaving the EU. She's popular among the party's grass-roots members.

In a vote of Conservative MPs on Thursday, May received 199 nods. Leadsom trailed her with 84 votes. Together, they knocked out Justice Secretary Michael Gove.

Next, the two women will face off for votes among Conservative Party members.

Officials say that winner will be announced in early September, though there's a chance that gets moved up in an effort to provide some stability post-Brexit.