Looking Back At When Sports Figures Decided To Speak Up 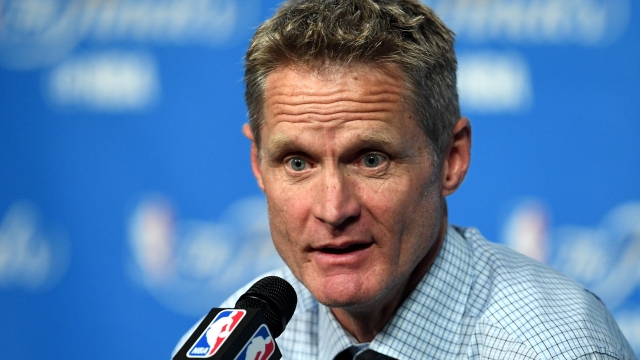 SMS
Looking Back At When Sports Figures Decided To Speak Up
By Carter Woodiel
By Carter Woodiel
June 25, 2016
Golden State Warriors coach Steve Kerr recently sounded off about guns, joining other sports icons who've made their voices heard on social issues.
SHOW TRANSCRIPT

Steve Kerr, who coached the Golden State Warriors to their record-breaking 73-win season, made an impassioned call for gun control on a podcast hosted by the San Jose Mercury News.

"I kind of think that our forefathers would not have OK'd automatic weapons to be sold to everybody," Kerr said. "I mean, it's easier to get a gun than it is a driver's license, and it's insane."

When it comes to sports figures speaking out on divisive social issues, Kerr isn't alone.

In 2014, players across the NBA wore "I Can't Breathe" T-shirts while warming up, referring to the last words of Eric Garner — a man who died after a struggle with New York City police officers.

That same year, several St. Louis Rams players came out of the home stadium tunnel with their hands up to show support for Michael Brown, who was killed by police in nearby Ferguson, Missouri.

Race-related protests in sports goes back a long way. At the 1968 Olympics, Tommie Smith and John Carlos made history when they displayed the black-power salute during the 200 meter medal ceremony.

"The bottom line is whether we can make a statement for society," Carlos said. "I feel like, you know, medals are great. But medals are nowhere near close to what life is all about."

But when it comes to athletes taking a social stand, no one comes close to the late Muhammad Ali, who fought fiercely for racial equality in his days as a heavyweight boxing champion.

"Why are we deaf, dumb and blind? Why is everybody making progress, and yet we lag so far behind?" Ali said.

Today's big sports stars have a lot of money at stake when they make public comments, and many times try to avoid saying something controversial. This was something Michael Jordan was famous for in his playing days.

So when sports figures make social stands, chances are they mean it.