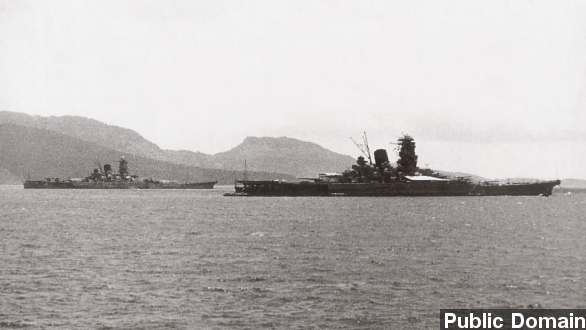 The ship on the right in this photograph is the battleship Musashi, which, along with its sister ship Yamato, was the heaviest-armed battleship ever built.

Now, Microsoft co-founder Paul Allen says he's found the Musashi about 3,000 feet under the Sibuyan Sea, in the central Philippines.

An unmanned submersible called the Octo ROV took this video, which Allen says shows various parts of the Musashi's remains, including multiple gun turrets and a plane catapult. (Video via Vulcan Inc.)

American forces sunk the Musashi in October of 1944 during the Battle of Leyte Gulf, killing more than 1,000 members of its 2,400 crew

It had been built as one of only two Yamato-class battleships, and was armed with the heaviest guns available. Japan's navy tried to use heavy armament to counterbalance the fact that it was outnumbered by American naval forces. (Video via History Channel)

The Musashi, and ultimately the Yamato as well, was sunk by planes launched from aircraft carriers, a technological advancement that would ultimately render battleships ineffective. (Video via PBS)

Allen has loaned his ship out on other scientific expeditions in the past, including one to the wreckage of another WWII ship — the HMS Hood. (Video via CBS)

The director of Japan's Kure Maritime Museum told CNN although it's an exciting find, they will need images of the entire ship's body to be 100 percent sure it's the Musashi.