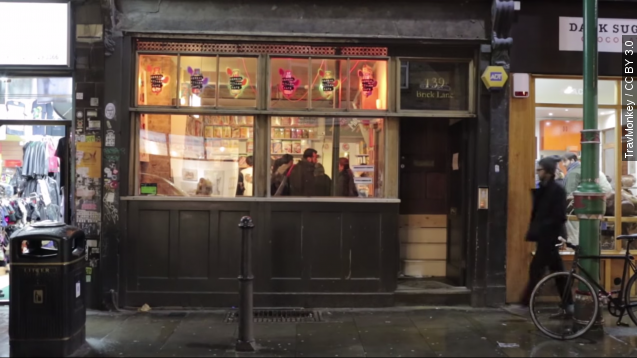 Protesters with masks and torches have taken to the streets of London... over a cereal cafe. (Video via BBC)

"So we're a speciality cereal cafe and we sell 120 different cereals from around the world,"  Cereal Killer Cafe co-owner Alan Keery explained. (Video via Time Out London)

Ok, so it's about more than the cafe. Shoreditch's Cereal Killer Cafe is just the latest staging ground for public unrest over gentrification. (Video via The Guardian, YouTube / TravMonkey)

For the last decade or so, Shoreditch has been a popular destination for young professionals, and protesters say that's raised property values and forced out the area's more working-class previous inhabitants. (Video via YouTube / iamOther)

East London in general has been a staging ground for the fight over gentrification, due in part to the so-called "renewal" of Stratford for the 2012 Olympic Games. (Video via Channel 4)

That event drew scrutiny, with allegations that homeless people in the area had been relocated, and tenants evicted. (Video via NBC, London SE1)

The popularity of London's property market is another driving force, with investors — especially from China and Russia — pouring billions into the market, driving up property values, and subsequently, rent. (Video via The Financial Times)

In that context it's not necessarily surprising that a cereal cafe — catering to people who can afford a five dollar bowl of cereal — has become a focus of the anger.

"Well if they're poor, probably not then," Keery responded.

The cafe called the mob's actions, defacing the shopfront, on Twitter a hate crime, but said it's open for business as usual.