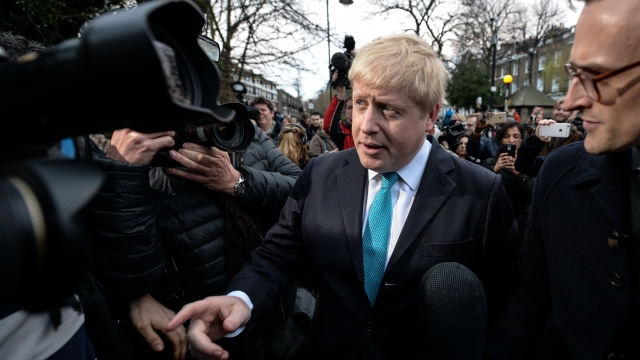 The U.K. is playing a "should we stay or should we go" game with the European Union. And as of Sunday, London Mayor Boris Johnson officially said, "We should go."

Johnson, who has kept mum about the issue for months, addressed a crowd of reporters Sunday outside his home, where he called for the country to cut ties with the EU.

"The last thing I wanted was to go against David Cameron or the government, but after a great deal of heartache, I don't think there’s anything else I can do. I will be advocating 'Vote Leave,'" Johnson told reporters.

Johnson's announcement comes just two days after U.K. Prime Minister David Cameron secured a deal with EU leaders to temporarily keep the U.K. as a member state and just hours after Cameron appeared on a talk show and asked the mayor for his support.

"I would say to Boris what I say to everybody else: We will be safer, stronger, we will be better off inside the EU," David Cameron told BBC's Andrew Marr.

Clearly Johnson disagrees. He said the EU is in "danger of getting out of proper democratic control," claiming there's "too much judicial activism" and "too much legislation coming from the EU."

So why is his opinion important? A lot of people like him. According to a recent poll, 32 percent of voters will look to the mayor's opinion when casting their decision on whether to stay or go.

Some are speculating his decision to back a so-called "Brexit" is motivated by a desire to climb the political ladder. Johnson is a likely candidate to take over the country's top job when Cameron leaves office. If voters demand the U.K. leaves the EU, The Washington Post reports that top job could become available a lot sooner than expected.

The referendum is scheduled for June 23.

This video includes clips from the European Council and The Telegraph and images from Getty Images.