Loggerhead Turtles And The Conservationist's Dilemma 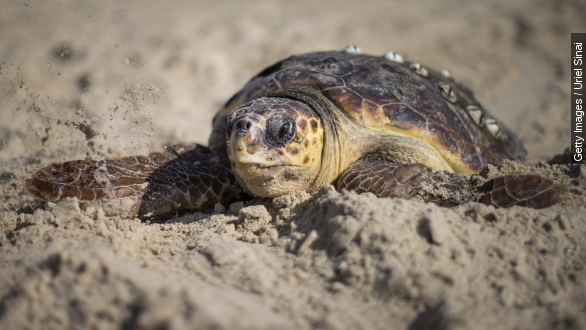 Chili powder, red flags, physical barriers — these are a few of the measures conservationists have taken to protect the endangered loggerhead sea turtle in Australia. (Video via Queensland Parks and Wildlife Service)

But they're not trying to protect the turtle — and specifically, its eggs — from poachers or other human threats. They're trying to stop its natural predators.

While it seems odd to see conservationists intervening in the natural process of predators hunting prey, that intervention has its limits.

Because the turtle's previous threat, foxes, were an invasive species, conservationists were allowed to just kill them off. But now, as a biologist from the University of Queensland told The Guardian, "that’s probably not a solution because goannas are native-protected animals." (Video via ABC Australia)

So why are humans trying to intervene to protect the turtles from their natural predators? Well, humans are to blame for the turtles' current conservation problem. (Video via GPB News)

The turtles are listed as threatened because humans across the globe hunted them, and although that hunting has tailed off, they are still often accidentally caught by fishing equipment. (Video via GoPro)

So now, with humans trying to preserve as many of the eggs as possible to restore the population, the turtles' case exemplifies a major dilemma for conservationists.

As a writer for Conservation Magazine laid out, on "one hand, rapid population increases often via controlled or assisted breeding are necessary to avoid extinction." But on the other, by eliminating the competitive element — the survival of the fittest — conservationists could encourage defective traits and genes. (Video via National Geographic)

In the meantime, The Guardian reports, the researchers have found that a mesh barrier surrounding the nest is the best way to keep the goannas at bay.