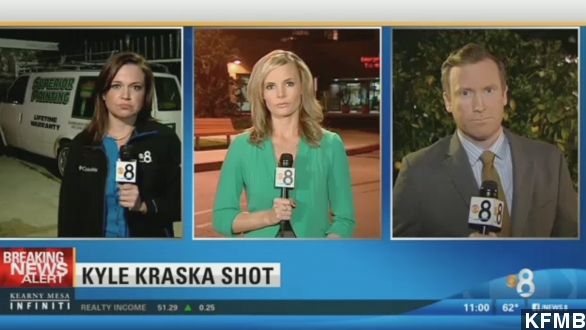 This came after the shooting of Kyle Kraska, San Diego TV anchor and sports director for KFMB. Police consider Montana a suspect in the shooting.

Kraska was shot outside of his San Diego area home around 3 p.m. local time Tuesday. He was transported to the hospital with injuries, but is expected to survive. And Kraska's station had all hands on deck.

"This has been a very difficult day, not just as a reporter, but also as Kyle's co-worker and friend."

Three live reporters were on various scenes, one talking about the arrest, one live at the crime scene talking to "shocked" neighbors and one outside the hospital.

"It was almost like my own brother," ER visitor Allan Musterer said.

The station said police would not say the connection between Kraska and Montana, but did call what happened to its anchor a "senseless act of violence."

It wasn't just KFMB, other local outlets were all over the news.

"In our newsroom and in Channel 8's newsroom, there was a collective gasp. And in our newsroom of course there was disbelief. A feeling that, actually, we feared the worst."

Police have not given a motive for the shooting.