Little Monsters, Where Is 'Meat-Dress-Gaga'? 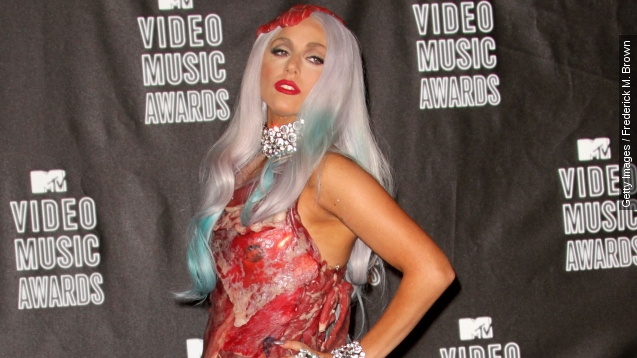 SMS
Little Monsters, Where Is 'Meat-Dress-Gaga'?
By Cody LaGrow
By Cody LaGrow
October 1, 2015
Lady Gaga, the queen of shock and awe, seems to be more relatable than ever.
SHOW TRANSCRIPT

Gone are the days of ground beef gowns, disco-stick dancing and slapping inverted crosses on her hoo-hah.

It seems Mother Monster has classed it up — taking on a pristine persona, singing alongside Tony Bennett, wowing us in a subtle black dress at the Emmys and making the Hollywood Hills come alive with the sound of music at the Oscars.

She's the reigning queen of shock-and-awe and taught us to expected the unexpected. And seeing this new classy Gaga made me feel ...

The Gagz has really turned over a new leaf. Billboard named her the 2015 woman of the year, saying she's a key influential figure who drove the conversation for the year.

And she's got the people talking, like Sir Elton John, who revealed her new album is "absolutely fabulous." Gaga's been teasing us with its release on her Instagram using the hashtag #LG5.

Perhaps she's channeled all her crazy-genius into the upcoming season of "American Horror Story: Hotel." Gaga will star as The Countess in a "very bloody season." I think she's dabbled in blood before.

But Gaga's latest music video doesn't show her getting saucy with Shamu, rather she's making a difference. She sang "Till It Happens To You" for "The Hunting Ground," a documentary about sexual assault in college. A portion of the proceeds from the sale of the song will benefit survivors of sexual assault.

In the past year, Lady Gaga got engaged to be married, helped friends expand their businesses and even received compliments from world-renowned co-workers like Kathy Bates, who said the real Gaga is "elegant, classy and gracious."

So go get cozy with slightly more relatable Gaga who loves making duck-faces with dogs and hates pantyhose. You never know when her genius will tell her to be re-born again in head-to-toe latex from a horizontal closet from Ikea. (All music videos via Interscope Records / Lady Gaga)