Little Leaguers Give Advice To Big Leaguers (Who Need It) 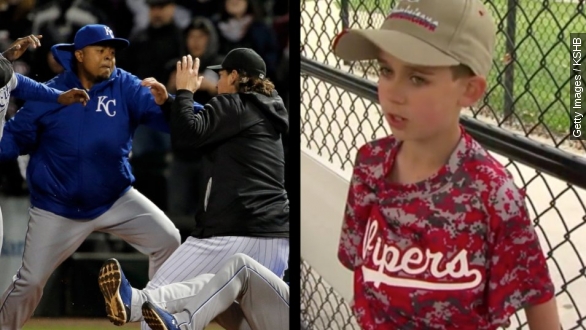 SMS
Little Leaguers Give Advice To Big Leaguers (Who Need It)
By Matt Moreno
By Matt Moreno
April 27, 2015
After two on-the-field altercations in the span of a week, the Kansas City Royals are getting a talking-to ... from little leaguers.
SHOW TRANSCRIPT

Rarely do little leaguers give advice to major leaguers, but after the Kansas City Royals and Chicago White Sox engaged in a good ol' bench-clearing brawl last week that looked like a big-kid temper tantrum, you can see why it's warranted.

"I would just tell them to get over it and just get to the next batter and go back to the dugout," McClane said.

Our partners at KSHB in Kansas City caught up with some local parents and kids who were disappointed in the Royals' actions last week. A total of six players were suspended between the Royals and White Sox after an exchange of words set off a gentlemen's disagreement.

And to be fair, maybe the Royals need a bit of a talking-to this season.

The defending AL Champs also got into it with the Oakland A's just days before this most recent dust-up. Things got heated after a hard slide by A's infielder Brett Lawrie and reached a boiling point after a behind-the-back fastball was sent Lawrie's way days later.

It's got us thinking maybe some of these big leaguers need a timeout.