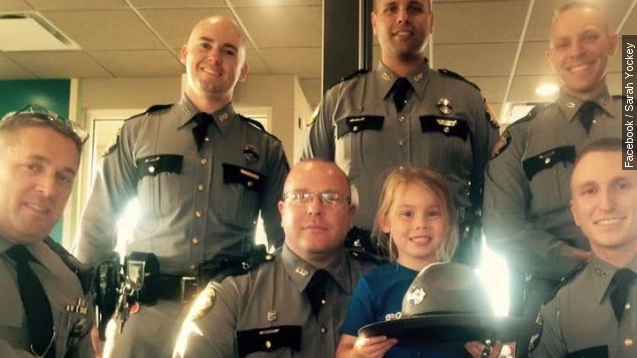 By Christine Slusser
September 21, 2015
Isabella Gregory used her own money to buy ice cream for state troopers mourning the death of one of their comrades.
SHOW TRANSCRIPT

If there's a universal truth, it's that ice cream is awesome. And equally as awesome:

This little girl who saved her allowance to buy some of the frozen good stuff for state troopers.

Some Kentucky state troopers were heading back from the funeral of Joseph Ponder, a fellow trooper who died in the line of duty.

During a traffic stop, a man sped off, and Ponder chased after him. His car hit the man's, and then that man fired into Ponder's cruiser.

The little girl, Isabella Gregory, saw the Kentucky state troopers while eating at McDonald's and told her mom she wanted to buy them ice cream because their friend died, WDRB says.

She brought them their treat, and Isbaella's mom snapped the pic. Isabella also wants to invite them to her birthday party in March.