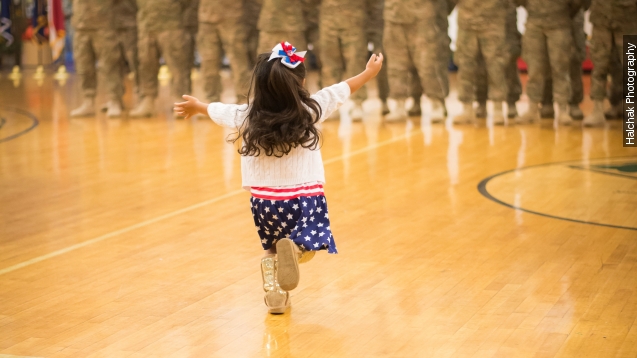 You ever have that moment where you're so excited you just can't stand it anymore?

A 3-year-old experienced it firsthand when she couldn't wait to see her dad, 1st Lt. Daniel Oglesby, during a homecoming ceremony in Colorado.

"Little Karis Oglesby, she just couldn't wait. She broke reins from her family. She ran out to greet her daddy before he was dismissed," a KKTV anchor said.

It's the hug that harbored hundreds of "awws," getting highlighted nationally on E!, NBC and ABC.

In February, Oglesby was deployed to Kuwait. It was likely a long eight months for the family, but for a toddler, five minutes can seem like an eternity.

Plus, Thursday was Karis' birthday. What a perfect present. Daniel's wife, Kristine, also told us the last time he came back from deployment was the first time he met Karis.

She was 2 months old then and cried. But no tears this time. Kristine said it "was a totally different homecoming."

NBC says Kristine would read to Karis and their other daughter, Layla, while he was gone.

One book was about military deployment called "Lily Hates Goodbyes."

In the book, the little girl runs out to give her father a hug when he gets home. Clearly, Karis was inspired.

Oglesby will also be home through the holidays.