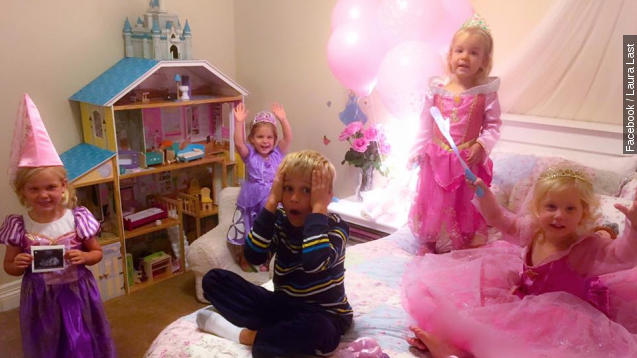 SMS
Little Boy Finds Out He's Getting A Fifth Sister In Hilarious Pic
By Ryan Biek
By Ryan Biek
November 17, 2015
Parents told their 6-year-old son that he'll have another sister and took a picture of his reaction. The Internet is loving it.
SHOW TRANSCRIPT

This is 6-year-old Matthew Last learning the upcoming addition to the family will be yet another sister.

His parents posted the picture as a part of their gender announcement, and it got more laughs after it was shared on the father-focused Facebook page Life of Dad.

We couldn't blame the little guy for dreading more estrogen, even if he isn't old enough to know what estrogen is.

His mother told NBC the picture is just meant to poke some fun; he's actually very excited to meet his new sister.

He and his sisters even predicted it'd be a girl before they learned the news. Although the kids seemed more interested in how the doughnuts tasted than what color they were. (Video via Facebook / Laura Last)