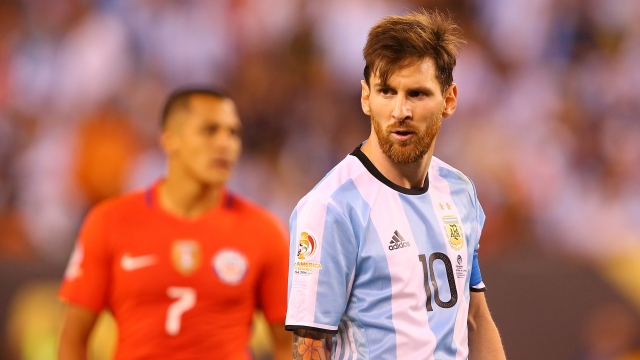 SMS
Lionel Messi Is Sentenced To Prison (But He Probably Won't Be Going)
By Matt Moreno
By Matt Moreno
July 6, 2016
A Spanish court found Messi and his father guilty of three offenses of tax fraud. Under Spanish law, though, they'll likely avoid jail time.
SHOW TRANSCRIPT

Messi and his father, Jorge Messi, were found guilty by a Spanish court on three offenses of defrauding the government of $4.5 million between 2007 and 2009.

Messi, the second highest-paid athlete in the world, also faces millions of dollars in fines for using tax havens in Belize and Uruguay.

SEE MORE: "Lionel Messi's Record-Breaking Goal Against Team USA Was So, So Good"

Messi has repeatedly claimed innocence in the case, saying he was focused on playing soccer while his father and tax consultants managed his money.

Messi's father told the court he didn't have the knowledge to pull off such a scheme and placed blame on the tax consultants.

So what does this mean for Messi's soccer career? Well, not much, probably.

Messi, who abruptly retired from international competition following another Copa America loss, isn't expected to serve any time behind bars.

Under Spanish law, someone convicted of a nonviolent crime and sentenced to under two years in prison can serve their time via probation.

Messi is expected to continue playing for Barcelona F.C. while his international status remains uncertain.

This video includes clips from RT and CCTV and images from Getty Images.