Lindsey Vonn Calls It Quits For This Season After Knee Fracture 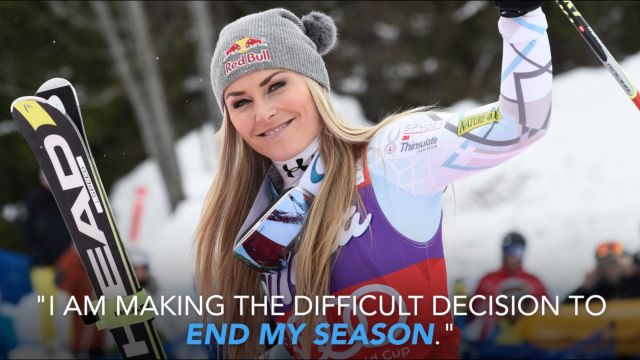 SMS
Lindsey Vonn Calls It Quits For This Season After Knee Fracture
By Matt Moreno
By Matt Moreno
March 2, 2016
The skier said on Facebook, "While I am confident that I'm making the right decision, it still doesn't make this decision any easier."
SHOW TRANSCRIPT

Alpine skier Lindsey Vonn is choosing to end her season early after an injury, despite leading the World Cup standings.

Vonn, ending eight races early, made the announcement on Facebook, saying: "While I am confident that I'm making the right decision, it still doesn't make this decision any easier. Thanks to everyone who supported me and stood by me through it all."

She raced again Sunday, finishing 13th, and then traveled to Barcelona for further tests on her knee.

According to Vonn's Facebook post, further examination showed three fractures "significant enough that they are not sufficiently stable."

Vonn currently sits 28 points ahead of Switzerland's Lara Gut, but now that Vonn's season is over, she'll likely lose her top spot.

The 31-year-old Olympic gold medalist has been hindered by injuries the past few years — especially to her knees.

Most notably, Vonn was forced out of the 2014 Sochi Olympics after a late-December crash in France, reinjuring her right ACL and MCL.

Vonn, an honorary ambassador for the 2018 Olympics in Pyeongchang, has said she wants to compete in the next Winter Olympic Games.

This video includes clips from Red Bull, GoPro and CNN, and images from Instagram / Lindsey Vonn and Getty Images.