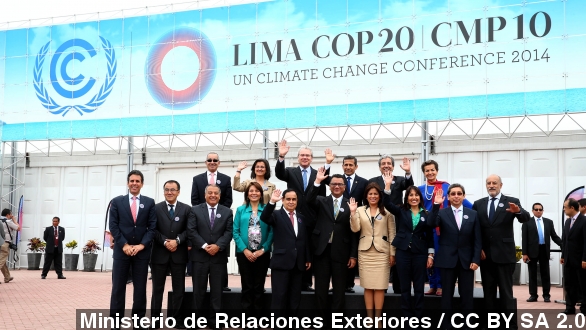 If there's any word that could define the run-up to the U.N.'s next climate conference, starting in Lima, Peru on Monday, it's optimism. Measured optimism, in two.

That's because, no matter the outcome, this conference's accomplishments probably won't be seen until a year from now, when the U.N.'s Paris conference rolls around.

Lima is supposed to lay out the foundations for what could be the most important international climate agreement in history. (Video via COP20 Lima)

And there are two main reasons the expectations are a little higher for Lima. The first is a big pledge the European Union made back in October.

The E.U. promised to cut its carbon emissions 40 percent by 2030 from 1990 levels across all 28 of its member countries. (Video via ABC Australia)

Then, less than a month later, the U.S. and China — the two biggest carbon emitters in the world — announced an agreement to establish concrete targets on emissions by 2030. (Video via The White House)

The optimism in the run-up to Lima has reminded some of the Copenhagen climate conference of 2009, which built anticipation, but ultimately failed to produce a substantial agreement to curb emissions. (Video via Cop15)

As one climate consultant told National Geographic, this time around there's more momentum behind the issue of climate change and, "We're in far better shape a year ahead of Paris than at any stage leading up to Copenhagen..."

When it comes to climate agreements, lately the focus has been on getting industrialized and developing countries to work together.

As The Guardian writes, to that end, "negotiators will also try to ramp up pledges for the Green Climate Fund, which was set up to help developing countries deal with climate change."

Nevertheless, the conference in Lima probably won't see too many world leaders, like the U.N.'s climate summit in New York earlier this year did, and it has largely flown under the radar of mainstream press coverage. (Video via PBS)

The conference starts Monday and runs through December 12.