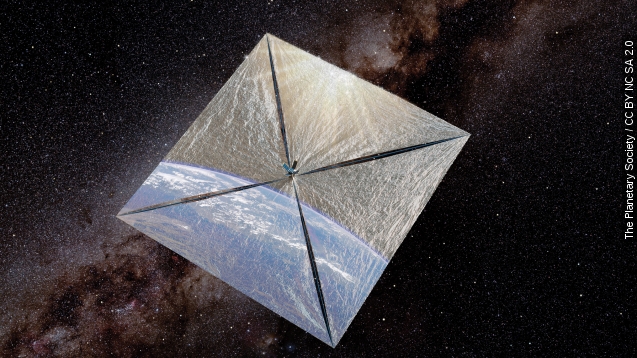 On Sunday, a private organization of space enthusiasts was able to claim its first major victory in well over a decade of developing solar sail technology.

For weeks, the project has seen glitches, software problems, repeated shutdowns and even an unlikely save by a passing bit of solar radiation, but The Planetary Society's Lightsail spacecraft was finally able to deploy its sails Sunday, condemning the budget solar sail to a swift and fiery death in Earth's atmosphere.

That part, at least, was planned. The spacecraft that's been keeping so many Planetary Society engineers on their toes recently is a prototype, destined for a short mission that will help sort out the bugs before a longer mission scheduled for next year.

Solar sailing is one of those technologies that's been around forever in theory but proven somewhat tricky in practice. The basic idea is simple: build a large, thin kite made out of reflective material that can literally use the gentle push of sunlight for propulsion.

The appeal is that, even though sunlight only provides a tiny bit of force, it provides it all the time. That means solar sails can keep moving fast and faster indefinitely without having to carry fuel or propellant. Some scientists think they're humanity's best chance to ever send a spacecraft to another solar system. (Video via NASA)

But the history of solar sail technology is one of repeated failures and sheer bad luck.

The Planetary Society saw two of its earlier spacecraft lost to rocket malfunctions. NASA also lost a solar sail prototype to a rocket failure and saw another one cancelled at the last minute. Its NanoSail-D2 is its only truly successful test, and it was limited to low Earth orbit.

Japan's space agency seems to have had the most luck with solar sail technology. The IKAROS spacecraft has been going strong for five years, and was the first solar sail spacecraft to make the trip to another planet.

But despite a history that a writer for Motherboard once described as "borderline cursed," The Planetary Society is going full speed ahead with solar sail technology. It has three more missions in the works after this month's successful test flight.

The organization's CEO, Bill Nye the Science Guy, said in a statement, "We've learned a lot about perseverance on this test mission. Although it's in inertial space, LightSail has had me on a rollercoaster. I want to thank the engineering team; they've done fantastic work."